6 Delicious Indian Street Foods that the World Need to Taste When talking about Indian street foods the first thing that comes to mind is panipuri, which is also known as Puchka in Kolkata, Golgappa and Pani ke Patashe in Delhi and Pani Puri in Mumbai. Panipuri mainly consists of crispy fried dough balls which are stuffed with a mixture of potatoes and spices. It is then dipped into spicy tangy water and then consumed. The potato mixture consists of potatoes, crushed chickpeas, sprouts, onions and a lot of spices.

Over the years panipuri has evolved and the dough balls are now available in the form of semolina balls as well. Apart from the tangy tamarind water a lot of other options have been started to be used such as the mint water, sweet chutney, sweet water and chilli water. Pani puri is an absolute best of taste and flavour in one's mouth. It's a blend of spicy, sweet and tangy flavour all at once.

Bhelpuri is the most popular Indian street food that is believed to originate from Mumbai. It is sweet, spicy and sour in taste. Bhelpuri is made with rice, vegetables which includes potatoes, onions, tomatoes and a variety of different chutneys. Bhelpuri is one of those Street foods which is loved by both kids and adults and is readily available on almost every nook and corner of the country. One of the reasons why this street food is so popular is the fact that it is a low-calorie snack with a variety of flavours and is absolutely delicious.

During the preparation of this delicacy, a lot of vegetables and spices are mixed with the puffed rice followed by the addition of a number of chutneys such as green chilli chutney, dates chutney and tamarind chutney. This food item is then garnished using coriander leaves, papdi and sev. Bhelpuri is a treat to the taste birds due to the amalgamation of spices and chutneys in it.

Pav is basically an Indian bread and Bhaji is a delicious blend of a number of vegetables which are cooked in loads of butter and spices. Pav Bhaji is an iconic dish from the streets of Mumbai and is very famous all over the country. The bhaji is prepared by adding a generous amount of onions and ginger garlic paste to boiled and mashed vegetables. The mast vegetables mainly consist of potatoes, tomatoes, carrot, capsicum cauliflower, peas and beans. All these ingredients are cooked together on a low flame by gradually mashing them all together and adding a special masala known as the pav bhaji masala. Bhaji is a bright Orangish red colour gravy due to the presence of a lot of spices such as Red chilli. Just as all the other sleep sweet items, a lot of variations have been introduced with Pav Bhaji as well over the years.

You can select from a number of Pav Bhaji options available such as cheese Pav Bhaji, paneer Pav Bhaji, no onion-garlic pav bhaji, mushroom pav bhaji etc. The pav or the bread is cooked using a lot of butter. Salt and pepper is used to add flavour to the pav. This street food is one of the favourite street foods of the country. 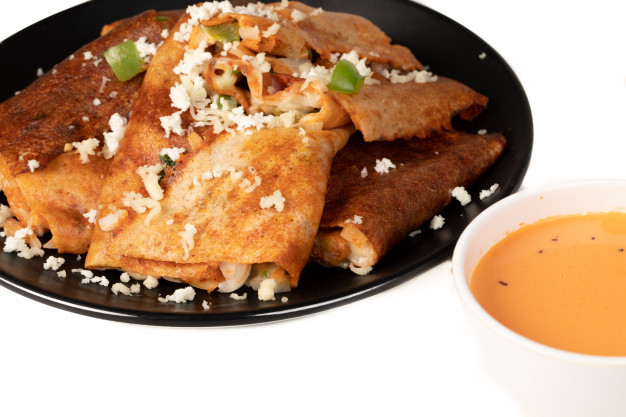 Masala dosa is one of those street food items which is believed to originate in the southern part of the country. Although it originated in Southern India yet it is one of the most popular street food items of the country. It is also one of the most famous Indian breakfast items as well. Dosa is basically thin and crispy crepe which is made out of a batter of fermented rice and lentils. Masala in masala dosa stands for a mixture of potato and spices which is stuffed into the dosa. Masala dosa is served with sambar and delicious coconut chutney.

The batter of lentils and rice is made by grounding the two items together after soaking them overnight. Masala dosa is very healthy to eat. Even masala doses a variety of options such as cheese masala dosa, onion masala dosa, butter masala dosa et cetera.

The one food item that can't be skipped when we are talking about Indian street food is the vada pav. Is also known as the common man food in Mumbai and is available all across Maharashtra. The preparation of this street food is very interesting as a batata vada (potato balls) is sandwiched between 2 slices of a pav along with a variety of chutneys such as green chutney, sweet chutney and dry garlic chutney. Batata Vada is made by adding a lot of spices to a potato mixture which is then covered with a batter of gram flour and is then deep-fried. Vada Pav is also known as Indian burger. It is served with sweet chutney and fried green chillies. 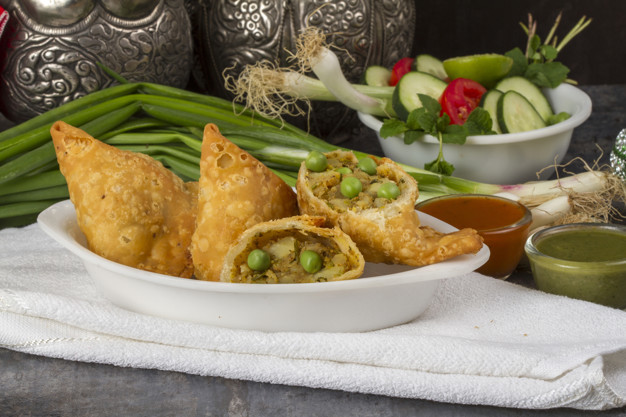 Samosa and kachori are one of the most popular Indian snacks which is served in various forms and styles all across the country. Both of these are fried Indian snacks. Samosa is an Indian party which is triangular in shape and filled with a filling of potatoes mixed with spices. Sometimes it even has feelings of cottage cheese, dry fruits etc.  Kachoris are on the other hand filled with a filling of sauteed lentils and spices. Both these Indian snacks are also served in the form of charts by adding yoghurt, onion chutney and spices. These are an inevitable part of Indian evening snacks. These are an inevitable part of Indian evening snacks and are served at almost every nook and corner of the country with local variations.